Your Ultimate Guide To Attending An Assamese Matrimonial

Your Ultimate Guide To Attending An Assamese Matrimonial 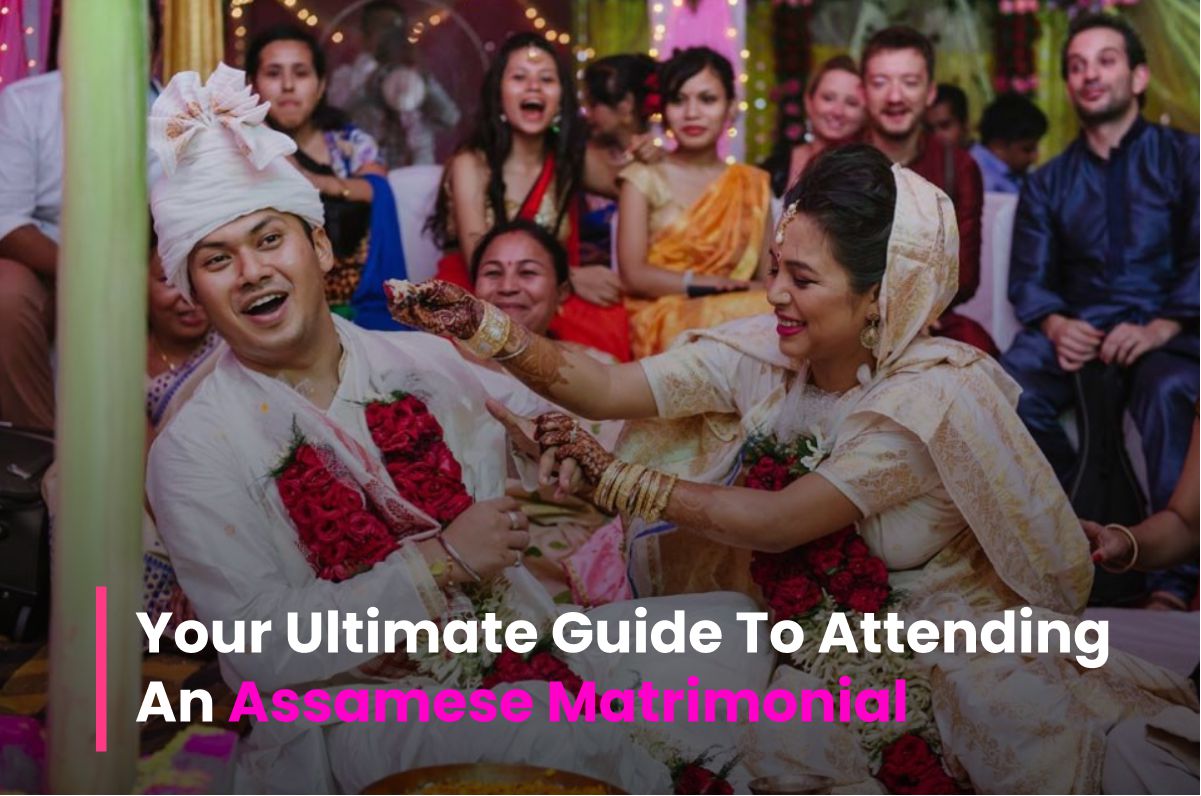 Assam is known for its tea plantations, beautiful locations, and scenic landscapes. However, one thing that makes it different from the rest is its wedding ceremony. Yes, Assamese matrimony is so pure, short, and filled with fun rituals that you have to attend it at least once. From food to simple rituals – everything takes you one step closer to the culture of Assam. With that said, if you have always been curious to know about Assamese matrimony and want to know everything about it. We have created an ultimate guide for you. Read on, and you can thank us later for all the deets.

Assamese Matrimonial Rituals That One Needs To Know About

‍In Assamese Matrimony, this function happens two days before the wedding. Here the groom's mother visit's bride-to-be's house with other female members of the family. She then gifts the bride Pan, betel leaves, and nuts with a Gamusa (a traditional Assamese cloth in white with red thread embroidery). The bride then takes these gifts and ensures that they are with her at the wedding pandal as well. The ceremony takes place at the bride's residence, and it's quite an intimate affair. After Juran Diya, Tel Diya takes place, where the groom's mother puts the betel leaves and nuts on the bride's forehead and gives her an oil bath. After these ceremonies, the groom's mother gives the bride her bridal trousseau, which includes Mekhela Chador, sarees, some utensils, jewelry, etc.

‍In Assamese matrimony, wedding rituals start early in the day. Pani Tula is one such ceremony that takes place on the wedding day. Here, the groom and bride's mothers go to a nearby waterbody for a ceremonial bath. Other female members of the family accompany them and sing traditional wedding songs while this ceremony takes place. The mothers carry a coin and knife during this ceremony, and after the ceremony, the coin is gifted to the couple. And the knife is tied in a white cloth until the wedding is over and is kept with the couple for luck.

‍Just like we have Haldi in North India, Assamese matrimony has Nuwoni, which takes place on the morning of the wedding day. A paste of turmeric, curd, and oil is made and applied to the bride and the groom at their respective homes. Elders of the family participate in this ritual. With traditional food, music, and lots of pictures, this is one event that everyone enjoys the most.

‍It's one of the fun wedding rituals you have to watch in an Assamese matrimonial. Here, the bride's brothers carry her on their shoulders till the mandap, and there's no entry bigger than this. She then sits next to the groom in front of the holy fire. The groom then walks under an umbrella which is held by the brothers of the groom. The Biya begins with a Jaimala ceremony, followed by a Kanyadaan and Saat Pheras. And during this ceremony, the relatives sing traditional Assamese songs to celebrate the couple and their union. Like other Indian weddings, Biya is an emotional moment and a must-attend ceremony for everyone.

Unlike North and South Indian weddings, Assamese matrimonial are short and fun. After all the wedding rituals, Khel Dhemali- a fun post-wedding ritual, takes place where the bride and groom play fun games to compete against each other. From finding the ring in a bowl of rice to other games, this ceremony is more like an ice-breaker that everyone in the family thoroughly enjoys. It not only makes the bride feel at home but also gives her a chance to bond with everyone.

‍After Bidai and other ceremonies comes the Ghor Gosoka Ceremony; here, since the groom's mother is not allowed to be a part of the main wedding, she stays at home and handles everything at home to welcome the newlyweds. According to the Assamese wedding traditions, almost every family follows this to date. Yes, we know it's a bit backward, but that's what people follow. So the ceremony of the groom’s mother welcoming her daughter-in-law and son at home is known as the Ghor Gosoka Ceremony.

Like other weddings, Assamese matrimony is filled with rich culture and traditions. And to truly experience what it has to offer, you have to be a part of it. On that note, have you ever been a part of Assamese matrimony? Let us know in the comments below.