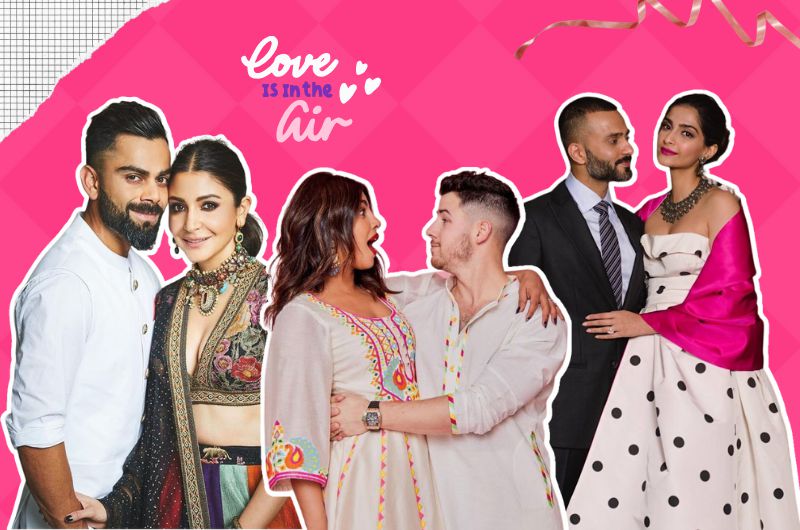 It would not be an overstatement if we say that it is raining love in Tinsel Town. Like literally. The biggest names in the country are tying the sacred knot with their betterhalf. Wondering where all of it started? Well, to give you a framework, all hell broke loose with the biggest shahid of last December when the youngest and hottest achievers of Bollywood and Cricket - Anushka Sharma & Virat Kohli - decided to get married.

Everyone was in celebration mode after seeing the pictures of Virushka! And after them, it hasn't even been a year when we've seen a bunch of power couples following the trend. Yes, yes, we agree that it would be a sin to call marriage a trend as it is something that has been happening in India for ages. However, 2018, as a year, has been quite the revelation in regards to weddings. So much so, that people consider it an Indian wedding year.

Sonam Kapoor became Sonam Kapoor Ahuja, Deepika and Ranveer finally said “I do”, and Priyanka gave Nick Jonas, our videshi damad a gift. Last but not the least, 2018 was also the year of a Royal wedding. Everyone decided to marry royally!

While we cannot deny the fact that all these couples gave us major relationship goals to achieve, it is important to dig deep. Our primary focus should be on finding out what goes behind the making of “Happily Married in 2018” so that we can borrow a few pages out of their books. There is no doubt that times have changed! We are living in a world where everything comes down to instant gratification. So, we thought of giving you our top 3 picks on how to be happily married ever after. So, without any further delay, let’s get to it!

We, at Betterhalf, received info from millions of couples across the globe who are living happily with their life partner. And based on the results, we decoded one thing - Looks don’t matter. Not at all! We observed that while a person is seeking his/her soulmate, intellectual compatibility is that one aspect where people don’t want to compromise. In short, those who choose intellect as their priority when choosing their Betterhalf had wayyyy more happy marriages as compared to people who choose looks.

Because you know that too, looks will fade after a point, and it would be your intellect that will matter in the long run. So, it is clear that we must not focus on the differences, and find more and more similarities between you and your potential partner. If you think alike, have similar interests, you are more likely to work as a team and a couple.

Communication is that boat through which you sail in a relationship. Without it, your relationship would cease to exist. As human beings, we only have this unique ability to comprehend our thoughts through words. Communication can be your best friend in a fight solution process. You cannot imagine how intense battles can be solved with proper and thoughtful communication. Also, it doesn’t mean that you only communicate during a fight. General communication is also necessary to have a healthy relationship.

Because you might be the best team in the world, but you could also have your differences. However, for as long as you communicate with each other, those differences would only highlight your similarities. You should not sleep over things unlike what is advised by many people! It’s better to fight it out, talk it out and hug it out! Despite so much evolution and technology, communication remains the best way to figure anything out!

Since we are living in a world surrounded by technology, it’s important to ration your time spent virtually and focus on real things. People are so engrossed in their cute black mirrors that they almost forgot that they have real people to talk to. Did you know that Anand Ahuja made some special rules for our social media savvy Sonam Kapoor so that they can spend quality time together?

As per their rule, Sonam and Anand do not use their smartphones once they enter the bedroom. No unnecessary interaction with the virtual world. What they do in the bedroom is a private thing between a man and his wife, but this is an important rule that we could all learn from the young couple. It’s not a new thing to realize that we are so wrapped in our busy schedules that we almost don’t value the few moments we get to spend with our betterhalf or loved ones. Screens around us swallow these special moments. Wouldn’t it be great to make this a rule to switch off from the screens for some time every day? Like some kind of daily digital detox. Or better, you can plan phoneless outings, no mail-checks after work, no peeps to check stories and reels on Instagram. By doing this, you can make your relationship only about yourselves!

Of course, we are not saying that only these three tips can help you to have a happily married life. A hell of a lot more takes to do this. However, these tips can surely help you as the core of any great marriage. Based on your personality, you can find something new.

If you are also looking for someone who shares the same thought as you do, now would be the best time to download the Betterhalf.ai app and start your search!