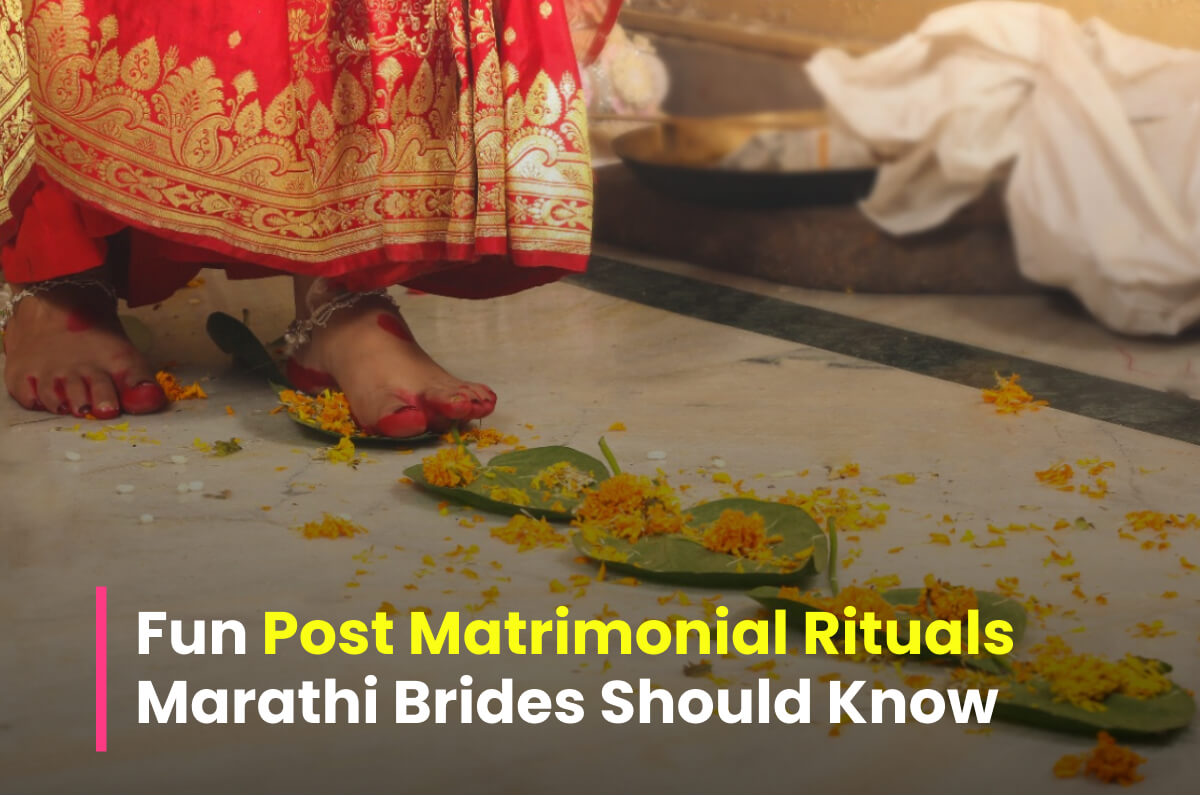 As a bride, there are tons of rituals that you are expected to know. Be it the Vidayi rasam or the significance of Kanyadaan - you have to know it all. And at times, with so many rituals in place, you cannot help but lose a count of them. However, when it comes to Marathi matrimonial, the rituals are pretty simple and straightforward. And if you are soon going to be a Marathi bride, here are some fun post-wedding rituals that you must know about. Each of these rituals is distinct and special. So read on, and you can thank us later for sharing them.

Post-Marathi Matrimonial Rituals You Must Know About

‍This sacred ritual usually is held after Kaniyadan and Saath phere. In this ritual, the bride while taking the seven rounds and vows, also touches seven heaps of rice which is kept for her right at the mandap. Heaps of rice are touched by the bride with her right foot only. It's not only considered auspicious but doing this ritual also blesses the bride and her family.

‍
‍Like other weddings, in this ritual, the bride bids a tearful goodbye to the family members while leaving for the husband's house. In some customs, she throws rice without turning back, while in some, wheat is thrown. Nevertheless, this ritual in Marathi matrimonial is very emotional, especially for the father, since fathers are always closer to the daughters, while the mothers are to the boys. ‍

‍
‍Once the bride leaves the house and makes her way to the groom's house, her entry is celebrated with fireworks and aarti. Her mother-in-law welcomes her to the family by performing aarti and washing the couple's feet with milk and water. And once this part is done- the bride then slowly kicks the rice Kalash, which is kept at the door and then enters the house. And while entering the house, she keeps her right foot first since that is considered auspicious.

‍This ritual officially marks the end of the wedding. It is held on the next day of the wedding once the reception and everything else is over. Here, the groom's mother gives a pearl-studded jewelry set and saree to the bride, whereas the bride's father gives the groom some silverware. The tradition is followed to bless the couple for a happy married life.

While every wedding in India is filled with glitz and glamor, there's something about Marathi matrimonials that make them so special. On that note, if you have ever been a part of Marathi matrimony, let us know which ritual was your favorite and why in the comments below.