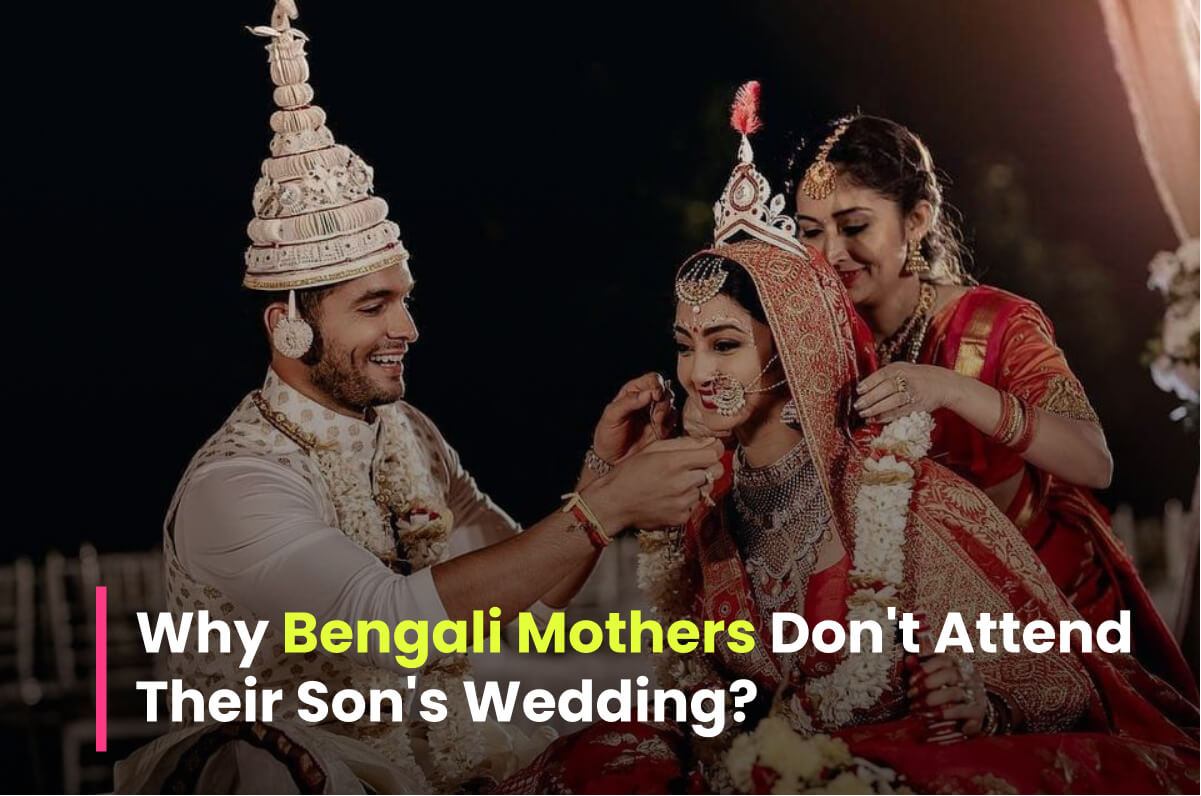 India is the land of larger-than-life weddings that bespeak nothing but grandeur. And while every Indian wedding is all about colors, culture, and traditions, one thing that comes with these weddings is superstitions. Be it any culture or religion - No Indian wedding is complete without myths and beliefs. And when we talk about them, did you know in Bengali Matrimonial, the groom’s mother cannot attend his wedding. Yep, you read that right, this ritual still exists, and even today, many Bengali families give importance to this particular ritual. Wondering why? Well, read on, and you'll understand why this ritual exists even in the 21st Century.

In Bengali Matrimonials, mothers don't attend their son's wedding and stay at home to welcome the bride. Some say that this was started by Maa Durga, while others relate this to the mother's evil eye. We millennials find this custom regressive and unnecessary, but trust us, almost every Bengali Matrimony follows it even to date. And here's everything you should know about it.

1. Maa Durga: As per the local folklore, back in the days, Karthik, Maa Durga's eldest son, wanted to marry princess Usha. And when the marriage was fixed, he decided to take Usha home. But before that, he wanted to ensure that his mother was okay with his marriage. So, Karthik asked Usha to wait in the paddy field while he met his mother. And Maa Durga agreed to the marriage; however, Karthik was not convinced after looking at his mother's reaction. Amid all this, he wore the wedding outfit and started heading towards the field, but suddenly he remembered that he did not seek the blessings of his mother.

And when he returned, he found his mother in the kitchen eating a lot of food too fast. When Karthik asked her about this, Maa Durga said she is eating as much as she could because, after the wedding, his wife might not let her eat properly. After listening to this, Karthik became sad and decided not to marry Usha. And even today, several Bengali families follow this story, hence, in a Bengali Matrimony, the mother relaxes at home one last time before the daughter-in-law arrives, making this one of the many reasons why she can't attend the wedding.

2. Evil Eyes: As per the folklore, it is believed that mothers bring ill luck to the couple; hence they don't attend the wedding. However, we cannot understand how this makes sense since mothers are the ones who sacrifice their happiness for their children, so how can any mother possibly bring bad luck to their children? And as we know, a child is the most precious to their mothers, hence when it comes to the fortune of their child, mothers in Bengali Matrimonial decide to skip the wedding.

3. Travel Issues: The only logical reason that justifies this practice is that in the olden days, travel was a luxury, and it wasn't possible for everyone to travel for a wedding. And as per Hindu rituals, the groom has to travel to the bride's place for the wedding, and in the olden days, this travel could take days and even weeks. Hence, it was difficult for everyone to travel as a family for the wedding since the roads were uneven, the route was unsafe for travel. So, in Bengali Matrimonial, Bengali Baraats (Borjatri) had very few or no women traveling with them. Hence, the mothers would stay back; wait for their daughter-in-law and son at home, this way she was safe and could do all the necessary arrangements from home.

However, things have changed now, but this ancient practice still exists in the real world. It's the Indian patriarchal system that forces all the families to follow this ritual for their Bengali Matrimonial; hence, the mothers choose to stay at home and miss their son's wedding. And while they have their share of reasons, do you think it's right to follow this practice even in the 21st century, or people should let go of it? Let us know what you think about this custom in the comments below.