5 Muslim Matrimonial Rituals Every Muslim Bride Should Know About

5 Muslim Matrimonial Rituals Every Muslim Bride Should Know About 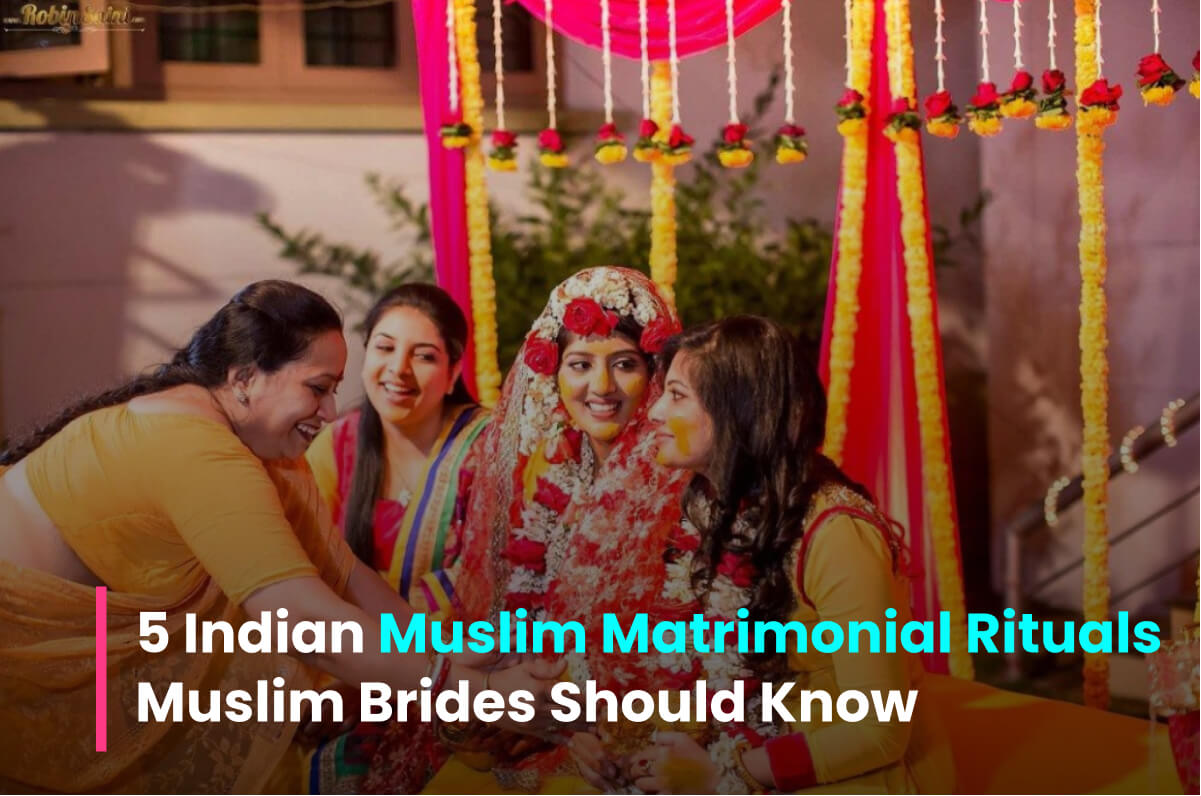 Indian weddings are quite different from the ones taking place in the West and Arab countries. It is not only different in terms of rituals, but the bridal outfits, functions, and food also change a bit. And one example of this is Muslim weddings. A Muslim wedding in Saudi Arabia is different from the one taking place in Dubai. Similarly, in India- the customs and outfits change according to the region. And if you are planning you live in India and are your Muslim matrimonial, then dear bride, here are five things you should know about. Read on for all the deets.

‍In Hindu weddings, people have a Haldi function, and in Indian Muslim matrimonial, people have Manjha Ceremony. In this ceremony, the bride wears a bright yellow attire and is applied the Haldi sent by her in-laws. The ceremony also takes place for the groom at his house. It is enjoyed by everyone with dancing, singing, and performances. As per the tradition, after the Manjha ceremony, the couple is not allowed to step out of their houses until the big day. Similar to Hindu weddings, in the Manjha ceremony, the older members apply Haldi first, followed by the rest.

‍Also known as the last pre-wedding ritual in Muslim matrimonial, here the bride receives her clothes and jewellery from her in-laws that she has to wear on the wedding day. The bride can opt for other designs and outfits for functions, but for the wedding, she has to wear an outfit given to her by her in-laws since that is filled with blessings and luck. And these gifts sent to the bride are known as Sanchaq. A similar tradition is followed in Hindu matrimony as well.

‍No matter what type of Muslim you are or in which part of India you live, Nikah is the main wedding ceremony followed by Muslims throughout the country. Known as the most precious and pure ritual of Muslim matrimonial, here the couple sits in the presence of their priest, and some verses from the holy Quran are read in the presence of other family members. And once the verses are read, both the bride and groom are asked if they accept the wedding, to which they respond by saying- Qubool Hai. After that, the bride and the groom are required to sign the binding contract, which makes them husband and wife.

‍A lot of Hindu and Muslim traditions are similar, but this one tradition makes Muslim matrimonial different from the rest. The ceremony happens after the Nikah ceremony, where the groom and the bride sit next to each other with their head covered with a veil. And guess what? They are only allowed to look at each other through a mirror that is placed between them. It is for good luck, and it's also for them to see each other for the first time as husband and wife.

Again similar to the Vidaai ceremony, which takes place after marriage; however, there's one ritual that makes this ceremony different. Here the groom's mother gives her daughter-in-law the Holy Quran before she enters the house. And the bride then enters the house holding the holy Quran in her hands while everyone celebrates her. Hindu and Indian Muslim matrimonial have a lot in common, and as a bride, these are a few of the important things that you must keep in mind.

So dear bride, if you are soon going to get hitched or if your bestie is getting hitched soon, then make sure that you know of these rituals in an Indian Muslim Matrimonial.